Did you hear? No, sorry, not about the developing ecological crisis and ongoing emergency in economic inequality. Minnesota’s shiny new $1B NFL football stadium! We’re all very excited.

ICYMI (although hard to believe that’s possible), Minnesota is building, with significant public funds, a new $1B stadium to serve one privately owned football team for 10 home games a year, at least 4 of which are likely to be meaningful to football fans. (To be fair, the new stadium may possibly a bring a super bowl, which would be great for corporate hotel sponsors and less great for anyone hoping to drive somewhere, or read about something else in the newspaper.) Here is the “rendering” of the stadium-in-development: 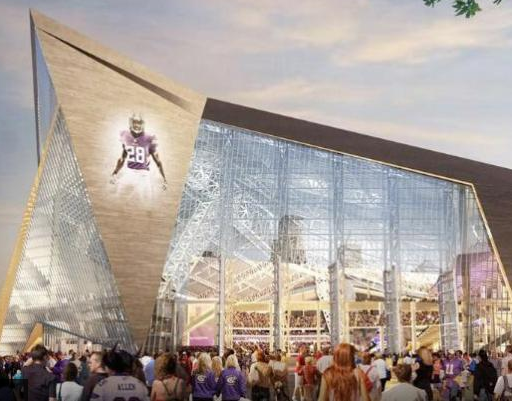 The Minneapolis STrib is reporting this morning that tickets for the new stadium — including for my not-rich-grandpa who has been going to Vikings games since long before the last time we built a new stadium — will come with an upfront “seat license” ranging from $500-$9,500. According the the story, “three-quarters of the stadium’s 65,000 seats will have a license fee attached. The average license will cost $2,500.” The license fees go to the team’s private owners, and will evidently be used for part of their share of the building’s construction expenses, as well as marketing (you know, because a good dose of marketing is definitely going to be needed).

There is one tiny thing I like about this seat license news. It gives me an opportunity to say this:

Dear Internet, I hereby declare that I will never use my own money to pay for a seat license to this Monument of Distraction, ever. PS – Adrian Peterson, you still rule, and I genuinely hope everything works out well for you.

Do you want a say on this situation? Express yourself here!