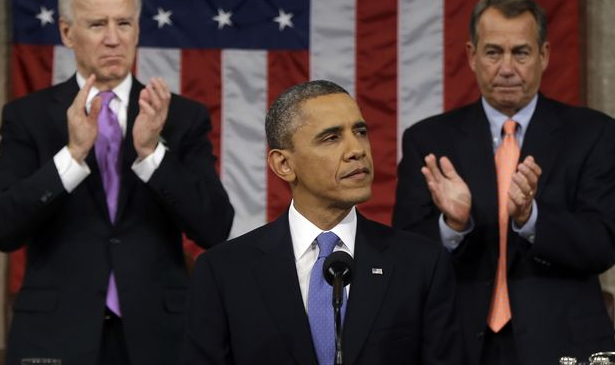 For many, the President’s State of the Union address this year was a bit of a feel good romp. (“Where has this been for 6 years?” and etc.) Some have argued that, to the degree this year’s SOTU was improved, it has more to do with political calculations than Obama himself, but that said, he did offer more in this address than any SOTU I can remember, with a couple of potshots at the troglodytes to boot. Let’s take a look at some of what the address did, and didn’t include.

Here are three of the better excerpts:

Money: “To everyone in this Congress who still refuses to raise the minimum wage, I say this: If you truly believe you could work full-time and support a family on less than $15,000 a year, go try it. If not, vote to give millions of the hardest-working people in America a raise.”

War: “The question is not whether America leads in the world, but how. When we make rash decisions, reacting to the headlines instead of using our heads; when the first response to a challenge is to send in our military – then we risk getting drawn into unnecessary conflicts, and neglect the broader strategy we need for a safer, more prosperous world.”

Climate: “2014 was the planet’s warmest year on record. Now, one year doesn’t make a trend, but this does – 14 of the 15 warmest years on record have all fallen in the first 15 years of this century…The best scientists in the world are all telling us that our activities are changing the climate, and if we do not act forcefully, we’ll continue to see rising oceans, longer, hotter heat waves, dangerous droughts and floods, and massive disruptions that can trigger greater migration, conflict, and hunger around the globe. The Pentagon says that climate change poses immediate risks to our national security. We should act like it.” (emphasis mine)

The President of the United States saying these things out loud is a progress of sorts to be recognized. A full transcript of the address is available at NPR.

Not surprisingly, the address also glossed over some pretty key facts and context. Here are a few of the more important facts that I believe were not properly represented in the address:

Incarceration. With 2.2 million people in jail, the United States has the world’s highest incarceration rate. (Highest!) [Harvard Mag] Incarcerated drug offenders are up 1200% since 1980, and 75% of prisoners locked up on drug-related charges are African-American. In his book “Blowing the Roof Off the 21st Century,” Robert W. McChesney makes a compelling case that these developments are due in significant part to economic forces, including the increasing privatization of prisons. This is plainly immoral, and key information to include when one is boasting about crime rates. #NotInSOTU.

Inequality. Income inequality in the US is at its worst since 1928. [Pew Research] The top 1% of the world’s population owns at least 40% of its wealth. [Vox] This was #NotInSOTU.

Military Spending. The US spends more on the military than the next 10 countries combined [NBC], outlays which are increasingly privatized. We have military bases and operations all over the globe. We are an empire. #NotInSOTU

Planet. We have lost half of our wildlife on this planet in just 40 years due to human exploitation and habitat degradation, threatening all life on this planet. [World Wildlife Fund] This unbelievable and urgent development, tied directly to our economic system, was #NotInSOTU. Not remotely.

These are just a few examples of crucial topics I did not hear honestly addressed in the SOTU. We also heard very little if anything about drone killings, infringements on civil liberties, police brutality, and the absolute urgency and reasonability of the demands of the #BlackLivesMatter movement. (For more of what wasn’t in the address, check out Seattle City Council Person Kshama Sawant’s “Socialist Response to the State of the Union” and Ralph Nader’s “Swings and Misses“.)

There was value in the President’s 2015 SOTU, and we should both appreciate his inclusion of certain matters as well as demand action to accompany the words. Obviously, even in the best of times with the best of intentions, it would be impossible and perhaps even unwise for the President to take up all subjects of concern during the State of the Union address.

We must also, though, have our eyes wide open. A mere two days after Obama declared ”The shadow of crisis has passed, and the State of the Union is strong,” the Bulletin of Atomic Scientists and its 17 nobel laureates moved the Doomsday Clock 2 minutes closer to midnight, citing climate change and nuclear proliferation. [CNN] That clock now sits at 11:57.

I wonder if those guys were watching the same speech we were.

On Friday the US State Department released a final Supplemental Environmental Impact Statement for TransCanada Corp’s proposed Keystone XL pipeline. Tonight, #NoKXL vigils were held around the country, calling on President Obama to reject the pipeline.

According to NPR’s story Saturday, “the State Department report finds that even if the Keystone XL is not built, it’s likely that producers would find another way to sell their oil. That’s how the State Department concludes the pipeline would not contribute significantly to carbon pollution.”

In other news, Logic and Ethics professors everywhere were heard vomiting into their computers. TransCanada Corp., for its part, is “very pleased with the release.”

I’ve noticed lately there’s hardly an article about Elizabeth Warren (she’s great) which doesn’t also offer presumptions about the 2016 candidacy of Hillary Clinton. Fair enough, I guess, except that the same agents of the status quo currently lining themselves up around Sec. Clinton will no doubt later seek to pawn her candidacy off on us as the result of an authentic democratic process.

The scenario is familiar: 1) Party machinery grinds forward one or more insider candidates long before most of us are involved. 2) Barring sufficient democratic intervention, said candidate receives the party’s nomination. 3) And, with Ranked Choice Voting not yet nationally available, those preferring a meaningful departure from the status quo are faced with a lesser-of-two-evils scenario, which is, at that late date, regrettably compelling.

Frankly, I resent the dynamic. I thought about doing some huffing and puffing about how I will be refusing to support a corporatist-warmonger candidate in 2016, including Hillary, regardless of what type of maniac the other corporatist-warmonger party nominates. But then I thought, this is not a threat, this is feedback which might genuinely be useful to someone.

Because here’s the thing, I might actually refuse to support another corporatist-warmonger candidate in 2016. I for one feel more fortified in this position than I did last year when I, yes, reluctantly voted for Mr. Drone. (Although I did not, I’d like to note, offer support in the form of money, organizing, or positive voice, as I do for candidates representing a genuine alternative.)

As I see it – and I’ll grant, it’s an uncomfortable position to assume — the risk to the planet of another four years without a radical departure from the status quo may now be more dangerous than the risk of one corporatist candidate losing to another corporatist candidate. And to the extent others are agreeing, it’s likely in a manner not currently anticipated by backward looking data and self-serving whitepapers. Given the thin margins in which these campaigns now operate, it wouldn’t take many.

In other words, dear Democrats, as you paper state fairs and clog inboxes with presumptions and propaganda about your self-appointed candidate, a friendly heads up: If you are counting on the same levels of reluctant, nose-holding support in 2016 as was received in 2012, it may not be forthcoming.

As Russell Brand put it in his popular recent BBC interview, “Then it’s this one gets in, then it’s that one get in, but the problem continues. Why are we going to continue to contribute to this facade?” Given what will surely be pitched as another hugely important election in 2016, I think those of us who demand a genuine alternative should be saying so early and often.

Update: This sponsored ad is popping up on facebook feeds December 2013. Establishment money at work. 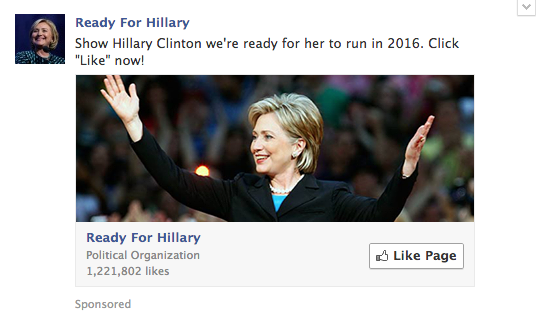 Update #3: January 19, 2016: In a piece titled “Democrats Fear Bernie Sanders Supporters Won’t Back Clinton if She Wins Nomination,” the Washington Times reports that 14% of Sanders supporters say they will not vote for Clinton under any circumstance.

I went to 350.org’s Forward on Climate Rally in Washington DC on Sunday, the stated goal of which was to demand action from the White House on climate change and to reject the Keystone XL tar sands pipeline. Yes to both! The pipeline is a disaster, and another glaring opportunity to start in earnest the magnificent course correct this moment requires. Taking that truth to be, as I do, overwhelmingly self-evident, this post is rather about reaction to the event.

Predictably, it was met with a certain amount of criticism, including from folks who otherwise agree with the goals. Michael Swanson at warisacrime.org counts himself among the underwhelmed. To him, the rally was “packaged as a belated campaign event” and should have “simply demanded the protection of our climate.” (I don’t agree that it was the former, or that it did not do the latter, but I do share some of his concerns.) Here’s a sampling of some other criticisms: It was not “Gandhian” enough. It was too phony, or too partisan. It wasn’t disobedient enough. We should be protesting militarism instead. There weren’t enough people there (350.org asserts 40,000). Too few news outlets were covering the event. The President wasn’t even in town. (He was, according to HuffPo, playing golf with Tiger and “oil men.”)

Each of these concerns merits discussion. After all, whatever we choose to do or not do, we’re expending time, money and energy. And for my part, I certainly have moments — perhaps while plodding along a pre-approved march route with someone screaming “this is what democracy looks like” in my ear as if that’s doing much other than making it harder to enjoy participating in same — when I consider whether it’s worth it, or whether it will amount to anything more than a hill of beans.

That said, my thinking on this day was, I’m going to go stand with several thousand people (or as Casey Camp from the Ponca Nation of Oklahoma put it, her relatives…which I love) and demand action on climate change from a guy who was at that moment golfing, whatever the result. Would my time have been better spent volunteering somewhere, or staging a one-man sit-in on the street corner, or even resting up on the couch for the next one, or for nothing at all? Except for that last bit, I honestly don’t claim to know. Maybe, after some further discussion, a better option will present itself. And it’s clearly important to at least be aware of our own limits. But on this particular day, this is what I did, and that’s sort of that.

One day I asked my friend Joel — one of the more effective Battle-Ax Boomers I know — about his general approach, and he said, “I keep showing up.”

Post-script: I’d be remiss to not also mention that, while not perfect, the event was still quite good. And some of the speeches — especially from the First Nation and tribal elders — were excellent. Here’s a sampling of additional coverage from Salon, the Nation (which, unlike others, actually grasped the nuance of the re-appropriated campaign slogan and logo), Truthdig, Democracy Now, and War is a Crime. And here’s an article from my bus friends, in Westchester New York’s Rivertowns Patch.