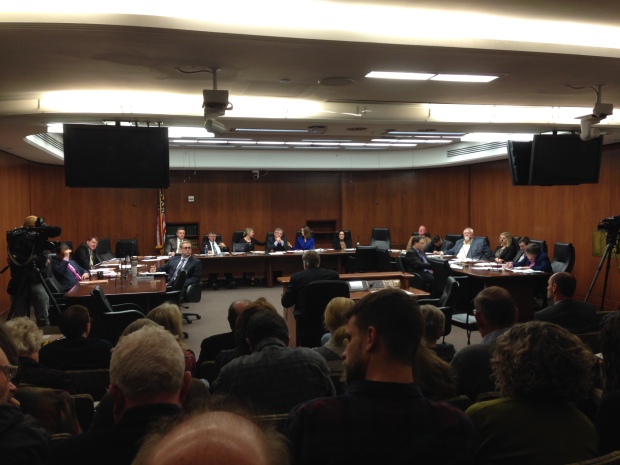 The new House Mining and Outdoor Recreation Policy Committee of the MN legislature held an “informational hearing” yesterday on nonferrous mining, with presentations from Mining Minnesota, PolyMet, and Twin Metals, and then some limited public testimony. I was in attendance. Some brief observations:

1. Firstly, Aaron Brown was pretty much spot on with his advance prediction in MinnesotaBrown:

I expect something of a dog and pony show in the mining and outdoor recreation committee today. There could be valuable nuggets of information and intrigue, but one would have to invest a lot of time removing a significant amount of political overburden before processing the raw ore of knowledge.

Yeah, that’s right. Regarding those few nuggets of information and intrigue:

2. Rep. Tom Anzelc had the closest thing to a “wow” moment at the hearing when he went on a mini and somewhat oddly timed rant about the MiningTruth billboard on I35. Evidently he really doesn’t like the dern thing. Says it’s political. (Not mentioning, I’d add, the loads of industry advertisements across our state, including at the state h.s. hockey tournament, which are inherently political of course. More on that soon.) @FriendsBWCAW tweeted the following response: “We’re glad to hear that Rep. Anzelc has noticed our billboard on Hwy 35. He should check out the @MiningTruth website.”

3. The points of view of various committee members are fairly well known and were on display as well. Range reps Melin and Metsa were cozy as ever, at one point enjoying a note passing with Anzelc during the Twin Metals presentation. Big smiles; the moment stood out. Chairman Hackbarth limited public testimony following the industry presentations to 34 minutes, explicitly excluding Q&A time which had been provided for the industry reps. The moment drew an audible reaction from the audience, who also didn’t fail to notice that much of those 34 minutes were then consumed by pro-industry testimony and chit chat from committee members. The first three testifiers were pro-industry. The hearing was adjourned at the scheduled time of 4:30.

4. Rep. Yarusso lobbed in a few questions (necessary minimum?) about industry testimony, including the oft-discussed question about water modeling, which question was ultimately punted to the regulators. Yarusso may be the lone voice on the committee willing to subject industry claims to any real scrutiny. Remains to be seen.

5. No major surprises in any of the above. That said, there is a development which took further shape yesterday meriting a mention. The Laurentian Divide — the north/south continental water divide which runs through N. MN —  appears to be increasing in political significance in a way that could have a meaningful impact on this issue. A good amount of the testimony yesterday was from the Ely area and focused on Twin Metals and/or the BWCA. The PolyMet operation, as I understand it, would primarily be in the Lake Superior watershed, i.e., south of the divide. We’ll see whether and to what degree “north of the divide” groups are willing to throw broader clean water interests under the bus. Folks are of course welcome to their own financial and strategic decisions, but I for one think a divide here is the wrong strategy for all those concerned about sulfide mining in Minnesota, and a long-term loser. Dividing and conquering isn’t exactly a new idea. And as we saw yesterday, opportunities for clean water advocates to testify publicly are at a premium. Public testimony which distances itself from the PolyMet part of the issue is not a zero sum proposition.

6. Regarding more broadly applicable testimony, Betsy Daub’s (Friends of the BWCA) was exceptional. She was the first to raise last summer’s Mt. Polley sulfide mine tailings dam disaster in Canada. And given the numerous claims from industry reps about safety, perhaps Mt. Polley should have been raised earlier. The committee, however and to its credit, did agree Mt. Polley requires further investigation.

To conclude, any “divide” which may develop along geographic lines is in my opinion the most important thing to watch coming out of yesterday’s hearing. Most of the other tunes in the room didn’t change a note. View the full hearing here.

[Thanks to Greg Seitz and the Wilderness News Blog for the mention in his “Top Tweets from the Hearing list, which you can find here.]

UPDATE: I received a call from Becky Rom at Sustainable Ely this afternoon in response to this piece. She assured me that, as far as she is concerned, no geographic divide is taking place and that yesterday’s hearing testimony was coordinated among advocacy groups to the greatest degree possible, including with Friends of the Boundary Waters. She added “we have to fight all sulfide mining” in Minnesota.

I also received the following note from Tony Yarusso, Rep. Yarusso’s son: “From the maps I’ve seen, the entirety of the (open pit) PolyMet proposal would be in the Lake Superior watershed, or at a minimum all of the storage and processing. For the (underground) Twin Metals proposal, mining would be in the Hudson Bay watershed, but materials would be transported to the PolyMet facility location for processing. The location of processing and underground vs. open pit is significant (and good) for the BWCA portion of the equation, but it’s not like water in the southern watershed doesn’t matter obviously. Most significantly, Lake Superior has a commercially important lake trout fishery that has only recently rebounded from overfishing and sea lamprey problems, and the St. Louis River (the sub-watershed the mine would be in) has just had its first evidence of sturgeon reproduction after many years of work restoring both habitat and water quality from past impacts there.”