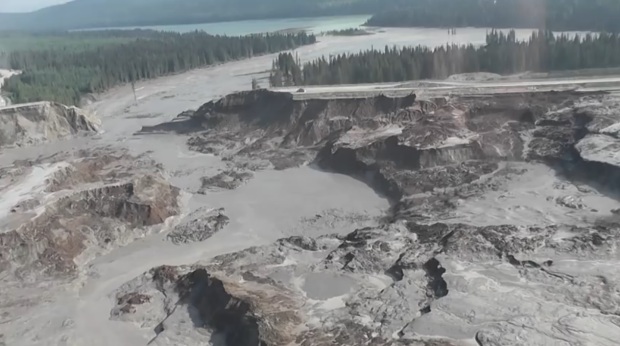 The Mesabi Daily News published an OpEd by Mining Minnesota Executive Director Frank Ongaro on December 20, 2014, and I’d like to take a minute to offer some thoughts in response here on Newspeak Review.

In his OpEd, Mr. Ongaro claims to break down a false choice between “the environment” and “jobs.” I believe he misses the real choice — between elevating the interests of multinational corporations and that of Minnesotans.

First, let’s be clearer than Ongaro about something that should be well understood by now: multinational mining corporations like PolyMet and its chief investor Glencore are not here to support wind turbines, build boats and computers, employ Minnesotans, spare poor people in far off lands, or benefit labor organizations and communities. They are here for profit and to further enrich the wealthy. Suggesting otherwise is a distraction.

The real question is whether we as Minnesotans would be better off with the companies here or without them. Reasonable people obviously disagree about that, so it strikes me that that’s where our focus should be.

Glossy PR images featuring windmills and cell phones do not tell the whole story. From where I sit, I see a terrible record of destruction by the sulfide mining industry, including the recent Mt. Polley tailings disaster in Canada, not to mention anti-labor practices everywhere it operates. (For a statement from United Steelworkers last month on Glencore’s labor practices, check out usw-global-allies-rally-in-london-demand-end-to-glencore-labor-abuses.)

Ongaro references “recycling our scrap metal” but I’ve heard no announcements about shortages of key metals in Minnesota necessitating major ecological risk-taking, or discussions of more comprehensive recycling programs. I observe a lack of conversation – especially from industry PR shills – about whether Minnesotans and Rangers should be better compensated for public lands and resources which some propose compromising in service of the global market.

Perhaps most importantly, I observe increasing environmental and economic turmoil, and a conversation mostly bereft of serious consideration of proposals for local economic diversification that would better serve the Range and the state. Instead, old rhetoric is used to avoid this conversation.

Ongaro’s suggestion that those who use metals (live in society) are disqualified from asserting viewpoints about how we manage public resources is reductive and insulting. We don’t need more “we use metals for stuff” puff pieces. What does “copper is useful” really tell us? Minnesotans understand that we use metals. Commenting on the production, sale, use, and re-use of those resources is not environmental hypocrisy, it’s responsible citizenship.

We all love this place. We all want what’s best for our communities. Many of us believe now is the time to discuss whether business as usual is the way to get there, especially when dealing with companies built to profit by destroying our land and water precisely to the level we allow it.

When pro-Minnesota advocates talk about sustainability, we are not, as Ongaro argues, advocating for a “utopian” vision. We are advocating for the best and healthiest possible future for our communities. And we simply don’t believe that future includes PolyMet and Twin Metals as currently conceived.

The industry, its ultimate motivations clear, wants to convince us that there are no hard choices here – that we can have it all. That just isn’t true. Distraction from the mining industry’s true purpose does us a disservice.

An excellent post from Steady City (quoting David Roberts), which relates directly to my recent post on the Forward on Climate rally. Regarding the Revkin pieces that Steady City and Roberts address: I highly doubt that a single person who was out there protesting the Keystone pipeline, or etc, (myself included) disagrees that a multifaceted Apollo-level effort to truly address the energy issue would be lovely (if not immediately required), or that other sources of energy (like Nigerian oil) may also be problematic, or that cutting existing energy waste is a good idea. Do we have a current effort equal to the task? No. Are any of these reasons to not protest the Keystone pipeline? Of course not. If anything, the opposite is true. Revkin’s reactions reflect a failure of vision. (Also, I’m glad he recognizes the perils of an energy oligarchy and costs of extraction, but his conclusion that he “would rather have the oil that we do use coming increasingly from responsibly managed and regulated sources here than the ends of the Earth and countries where oil wealth benefits few and the costs of extraction are borne by many” badly obscures a number of things including the reality that we have those problems at home as well.)

David Roberts responds to Andy Revkin’s piece in the New York Times calling the Keystone fight “counterproductive”. I think it’s one of the most important pieces of writing on the climate movement so far this year:

If you want to argue that activists shouldn’t focus on Keystone, you can’t just establish that rallying around and/or blocking Keystone won’t reduce carbon emissions much. So what? Why not try it? Something’s better than nothing, after all. Even if it’s a total waste of time, that may be unproductive, but it’s not counterproductive.

There are benefits to an activated, impassioned constituency and the social and political machinery that brings them together in large numbers. It’s what the right has: an intense core, fighting on behalf of the status quo (using the status quo’s money), that has captured one of America’s two political parties. It’s what the fight against…

I went to 350.org’s Forward on Climate Rally in Washington DC on Sunday, the stated goal of which was to demand action from the White House on climate change and to reject the Keystone XL tar sands pipeline. Yes to both! The pipeline is a disaster, and another glaring opportunity to start in earnest the magnificent course correct this moment requires. Taking that truth to be, as I do, overwhelmingly self-evident, this post is rather about reaction to the event.

Predictably, it was met with a certain amount of criticism, including from folks who otherwise agree with the goals. Michael Swanson at warisacrime.org counts himself among the underwhelmed. To him, the rally was “packaged as a belated campaign event” and should have “simply demanded the protection of our climate.” (I don’t agree that it was the former, or that it did not do the latter, but I do share some of his concerns.) Here’s a sampling of some other criticisms: It was not “Gandhian” enough. It was too phony, or too partisan. It wasn’t disobedient enough. We should be protesting militarism instead. There weren’t enough people there (350.org asserts 40,000). Too few news outlets were covering the event. The President wasn’t even in town. (He was, according to HuffPo, playing golf with Tiger and “oil men.”)

Each of these concerns merits discussion. After all, whatever we choose to do or not do, we’re expending time, money and energy. And for my part, I certainly have moments — perhaps while plodding along a pre-approved march route with someone screaming “this is what democracy looks like” in my ear as if that’s doing much other than making it harder to enjoy participating in same — when I consider whether it’s worth it, or whether it will amount to anything more than a hill of beans.

That said, my thinking on this day was, I’m going to go stand with several thousand people (or as Casey Camp from the Ponca Nation of Oklahoma put it, her relatives…which I love) and demand action on climate change from a guy who was at that moment golfing, whatever the result. Would my time have been better spent volunteering somewhere, or staging a one-man sit-in on the street corner, or even resting up on the couch for the next one, or for nothing at all? Except for that last bit, I honestly don’t claim to know. Maybe, after some further discussion, a better option will present itself. And it’s clearly important to at least be aware of our own limits. But on this particular day, this is what I did, and that’s sort of that.

One day I asked my friend Joel — one of the more effective Battle-Ax Boomers I know — about his general approach, and he said, “I keep showing up.”

Post-script: I’d be remiss to not also mention that, while not perfect, the event was still quite good. And some of the speeches — especially from the First Nation and tribal elders — were excellent. Here’s a sampling of additional coverage from Salon, the Nation (which, unlike others, actually grasped the nuance of the re-appropriated campaign slogan and logo), Truthdig, Democracy Now, and War is a Crime. And here’s an article from my bus friends, in Westchester New York’s Rivertowns Patch. 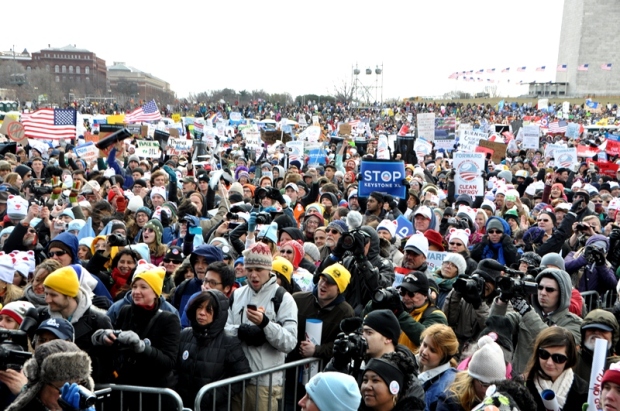