I imagine some peoples’ reaction to this headline will be, “that’s so obvious as to be borderline unhelpful,” whereas others will view it as nothing less than an affront to our entire country. In other words, we need to talk. 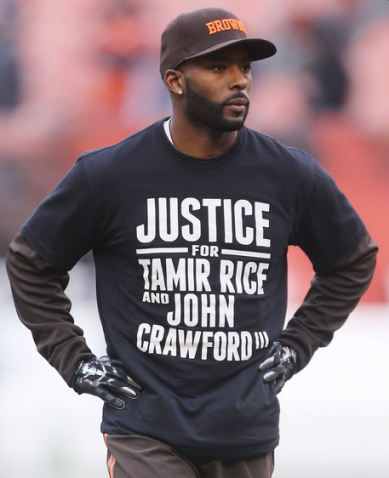 Earlier this month, five members of the St. Louis Rams made a powerful statement entering their Sunday NFL game, drawing a variety of reactions including demands for apologies from the police — even spawning a dispute as to whether an apology was made. This week, Cleveland Browns wide receiver Andrew Hawkins wore a “Justice for Tamir Rice and John Crawford” t-shirt during pre-game warm-ups, drawing a variety of reactions including, again, a demand from the police for an apology.

Hawkins’ statement, delivered without notes, captures what I’ve observed to be important and widespread sentiments. I highly highly recommend the full video. Here are a couple excerpts:

“Before I made the decision to wear the T-shirt, I understood I was putting that reputation in jeopardy to some of those people who wouldn’t necessarily agree with my perspective. I understood there was going to be backlash, and that scared me, honestly. But deep down I felt like it was the right thing to do.”

“It’s pretty pathetic when athletes think they know the law. The Cleveland Police protect and serve the Browns stadium and the Browns Organization owes us an apology.”

“They’re free to talk about it, but it shouldn’t be talked about on a football field where we are supporting the Browns by doing security.”

“How ‘bout this? Listen to police officers’ commands. Listen to what we tell you, and just stop. That eliminates a lot of problems…”

After being forced by the interviewer (nice job, by the way) to admit that, yes, citizens are indeed entitled to speak on matters of law and justice, Follmer reveals – I’m characterizing — that the real reason for his response is that he’s offended that anyone would have the nerve criticize any member of the force for anything they did, no matter what it was. At the end of his interview, Follmer’s frustration appears barely contained, as if he’s holding back an impulse to scream: “We’re the police. This job is hard, so let us do what we do and never ask any questions, you ungrateful punks.” (Incidentally, the way Follmer keeps calling Tamir Rice “the male” creeps me out. I don’t know if that’s training manual-speak or what, but it presents like a militarized robot — not a quality I’d look for in a spokesperson. Or a police officer.)

I don’t hear anyone questioning the challenges faced by police*, but in any event, when I watch Follmer (and the Saint Louis police spokesperson, which I wrote about here, and the MPLS police spokesperson in a slightly different context, which I wrote about here), I see anger and defensiveness. When I watch Hawkins, and when I listen to people at community forums closer to the situation than I am, what I hear are legitimate concerns about brutality and injustice.

Of course police don’t have exclusive right to interpret the facts and the law. We as citizens and as the communities who have commissioned the police have that right, and I’d say duty, as well. I would think an absolute minimum adjustment here would be for the designated police spokespeople to at least succeed in not suggesting differently on TV. (What does the unpolished version of this sentiment look like behind closed doors?)

Perhaps people are observing something that the police, because of the position they’re in, are having trouble seeing. Perhaps there are injustices here. (There clearly are.) Perhaps refusing to acknowledge them on any level is bad not only for the community but also for police. Perhaps the real issue has more to do with change than with speech.

I’m sure there are many reasons – good or bad – why police are feeling defensive right now. But, boy, it simply needs to be acknowledged that what brave people like Hawkins are saying is not only coming from a very real and personal place, it’s also exceedingly reasonable. I can barely imagine.

A deepening divide between communities and police is obviously a problem, and exchanges like the one between Hawkins and Follmer raise the question whether, on a fundamental level, the police see themselves as dedicated more to protecting the community or to something else.

We all bear responsibility for the situation, especially those of us in privileged positions, and we need to act. In the meantime, thank goodness for Andrew Hawkins.

For additional coverage of the Hawkins exchange, check out Salon here. For an interesting perspective on police reactions generally of late, including an example of what I think is a healthier police response, check out talkingpointsmemo.com here. For a defense of Hawkins’ right to speak, check out cleveland.com here.

*A (modest) suggestion for the collective: People shouldn’t have to say the following every second paragraph as a precondition to speaking at all: The job of the police is hard, sometimes life-threatening, and there are police officers willing to elevate the needs of the community over the needs of the police as an institution. This is not a small thing, and no one is suggesting it is. Can we just agree that most people feel this way, whatever else they think about these incidents? I think it would aid the conversation.