The movie I’m involved with is about to premiere. The press release is below. 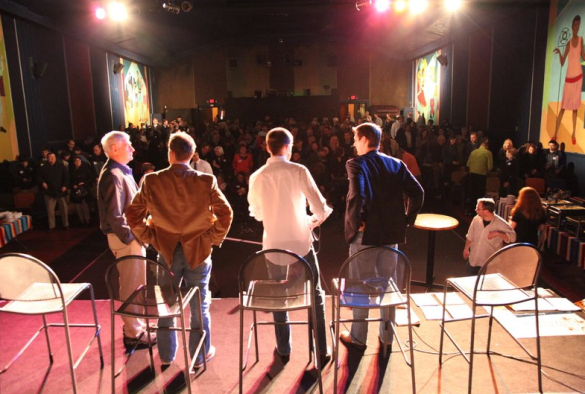 APRIL 10, 2013 — Northland Films’ GOLD FEVER, a new documentary about international gold mining, World Premieres this Saturday at the Environmental Film Festival at Yale (EFFY). The screening, at the Whitney Center for the Humanities, April 13, 7PM, will be followed by a Q&A and reception with Directors JT Haines and Andrew Sherburne and film participant Grahame Russell.

“Gold Fever is hard-hitting and intimate, and holds a crucial mirror up to our society, our values and obsessions,” said Richard Miron, EFFY director of programming. “This is a story that needs to be seen to be believed, and a discussion that needs to be had.”

Gold Fever witnesses the arrival of Goldcorp Inc to a remote Guatemalan village. Caught in the crosshairs of a global frenzy for gold, Diodora, Crisanta and Gregoria resist the threat to their ancestral lands in the face of grave consequences.

“The frenzy for an item with such dubious value as gold highlights crucial questions about resource extraction, sustainability, and state corporate policy in a way that stories about useful commodities often can not,” said co-director JT Haines. “There are extremely troubling consequences to our setting up shop in rural Guatemala, digging up gold from under functioning farms, and sending it home to be re-buried, with a complicated half-century history of violence paving the way.”

Immediately following the Yale premiere, representatives from GOLD FEVER and several interested organizations will travel to Guatemala to participate in a delegation to the mine-affected community on April 14-17. On April 18, GOLD FEVER will have its International Premiere at the 2000-seat Teatro Nacional in Guatemala City, as the opening night film of Guatemala’s premiere international human rights film festival, Muestra de Cine Internacional Memoria Verdad Justicia. Members from mostly indigenous mine-impacted communities around Guatemala will be in attendance.

“For several decades, Guatemalan society hasn’t had the opportunity to see itself reflected on screen,” said festival director Uli Stelzner. “Having Gold Fever as an international premiere will test Guatemalan society’s willingness to confront what might be today’s biggest challenge: overcoming the social unrest caused by the massive extraction of natural resources.”

In the past month, escalating violence tied to mining-related tensions has claimed the lives of five indigenous human rights activists working in mine-impacted communities.

GOLD FEVER’s launch in Yale and Guatemala highlights the cross-border relevance of the story. The film will also screen in April at the Independent Film Festival of Boston and the Minneapolis / St. Paul International Film Festival. Subsequent festival screenings will be posted on the film’s website.

Northland Films’ work examines themes of nature, community and development in unexpected places. POND HOCKEY, was hailed by ESPN’s John Buccigross as “the best hockey movie ever,” named “Best of Fest” at the 2008 Minneapolis / St. Paul International Film Festival, and broadcast nationally on NHL Network. FORGOTTEN MIRACLE, a collaboration with USA Hockey and the United States Olympic Committee, was lauded as “a solid documentary” by The New York Times.